Bartolomeo Scappi wrote his Work published in Venice in 1570. Opera was republished at least 7 times up to 1646.

This cook came from Bologna, where he worked in the service of Cardinal Lorenzo Campeggi. In 1536, he organised a sumptuous banquet for the cardinal, in honour of Charles Quint (the menu is described in book 4, Quadragesima, p.320). Scappi then worked in Rome as "secret" (private) cook to Pope Pious V and his successors Julius III and Pious VI. It is also believed that he worked in the service of Cardinal Marin Grimani in Venice.

He's a great connoisseur of regional Italian cookery, with several regional specialities. But he is also familiar with numerous recipes from other countries: France, Spain, Germany. He even gives a recipe for couscous à la moresque (in Moorish style).

Opera takes the form of a culinary treatise with more than 1000 recipes, numerous menus and - exceptional at this period - woodcuts illustrating the kitchen, the cooks at work, kitchen utensils, and the serving of meals: a particularly important record of the practical realities of cookery of that day and age.

The recipes of Bartolomeo Scappi blend the heritage of medieval gastronomy (spices and sweet-and-sour sauces) with some novelties unique to Italian Renaissance cooks: the important addition of offal in imitation of roman cookery, the introduction of dairy products (butter, milk), a significant increase in the number of meat or fish dishes employing the use of sugar, and the beginnings of flaky pastry. American produce is not yet present on Renaissance tables except for the "poule d'Inde" (in French dinde), or "turkey" in English, (from the names of the countries this native American bird was mistakenly believed to have originated from).

Scappi seems to have a predilection for marinades, for stewing and for the bain-marie. His work is composed of 6 books and an illustrated section: 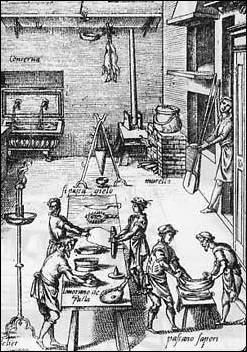 
In particular, kitchens with stone-built stoves (the "potager"), running water in a sink, a raised fireplace, many types of pans, knives, a lever for raising heavy cauldrons, a mechanical spit, cooks and waiters at work: all precious records of the life of 16th century cooks.

Bartolomeo Scappi was the equivalent of Antonin Carême during the Renaissance, according to Liliane Plouvier and Françoise Sabban. Scappi was in effect not only a pratitioner but also a great cookery theoretician, who knew how to present a complete panorama of the cookery of his period. Domenico Romoli (La singolar Dottrina, Venise, 1560), who had been a cook before becoming Maître d'hôtel, reproaches Scappi for making great use of spices and sugar, which is not to the taste of many people, and in particular ginger, nutmeg and cinnamon (La gastronomie à la Renaissance, Sabban - Serventi): Medieval gastronomy was shortly to become challenged, to make way for the "nouvelle cuisine" of the 17th century, which preceded the so-called classic cookery. This "nouvelle cuisine" notably rejected the sweet and savoury mix (from then on, only desserts were sweetened) and diminished the use of spices. Scappi is thus one of the last great cooks of what could be called Medieval gastronomy.

To make a pottage of wild or cultivated asparagus
Take the most tender parts, boil them in hot water until they become soft, then finish cooking them in a good capon or veal stock, and serve them with a small quantity of this broth. Wild asparagus can be cooked with raisins. When cultivated asparagus spears have been cooked in their broth, they can be served whole with bitter orange juice, sugar and salt, and on fast days other vegetables can be served as usual. (Livre 6, 103, p.413)

Italy - map of Europe - To top of page