The cooks, manuscripts and cookery books of Medieval Europe. The garden and the spices in the Middle Ages. The Medieval cookery.

Having read some ancient cookbooks, and countless works by historians, botanists, sociologists and gastronomes, a handful of enthusiasts of ancient gastronomy wish to use the magic of Internet in a European perspective, to:

For this reason, we propose 5 courses to lead you through Medieval Europe: 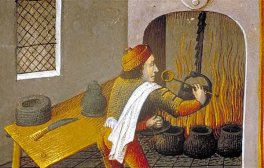 We have little information about them, but 11 of them are better known to us, through their books.

2 - Manuscripts and cookery books
in the Middle Ages

In Europe from the 13th to the 16th century, the elite classes shared a common culinary culture, which gave rise to a hundred or so manuscripts and cookery books in Europe. There are Medieval cookery books in English. We also provide a timescale.

We explain words (in French) in Medieval cookery, which help to understand recipes in Old French or Old English.

In We give a list of digitized ancien texts, in their own langage. The Platine en français and the Livre des confitures by Nostradamus have been published in Lyon (France). Liber de coquina, Tracatatus... et Enseignements... have been found in a manuscript of the BN (Bnf, Bibliothèque nationale de France).

Being at the origin of numerous local and regional specialities (in French), Medieval gastronomy is an astounding source of inspiration and innovation.

Rediscovering tart, sweet-and-sour tastes, light sauces and the flavours of harmonious blends of spices takes us back to the source of our European culinary heritage.

In the Middle Ages, this astonishing, rich cuisine was concocted with ingredients from Europe, Asia or Africa. Hence it is cookery from before the advent of the tomato, potato, courgette or cocoa, which are the heritage of America. It is interesting to review the list of ingredients known at the time: The garden and the spices.

To top of page