The elite classes of 13th to 16th century Europe, shared a common culinary culture, out of which sprang around a hundred cookery books in Spain, Italy, England, France, Denmark, Germany, Portugal, the Netherlands, and Belgium.

We have classed those texts written in Tuscan, Venitian, or other dialects as "Italian". In Spain, some books were written in Catalan and others in Arabic.

Manuscripts and books classified by country or by language

The most ancient texts, such as the Sion manuscript, have come down to us in the form of rolls or books of parchment. The parchment was usually made from the skins of stillborn animals (calves, kids, lambs), tanned and cut to the required size. This demanded an enormous amount of preparation, and for this reason, parchment was expensive and scarce. The copyist, who was often a monk, originally used an ink made from cabbage juice, copper sulfate (cupri rosa or couperose) and oak gall, all cooked in gum arabic with the addition of beer or wine.

Later, manuscripts were established on paper made from rags of linen, hemp and cotton. This technique was invented in China in the 2nd century. The Mongols later exported it to Damas and Bagdad from the 8th century onwards. In 1250, paper was manufactured for the first time in Europe in Fabriano, near Ancona (Italy) but it wasn't until the middle of the 14th century that paper mills began to spread throughout Europe.

In the 13th century, the copying of books became more widespread, leaving its monastic origins for the more profane world of the professional copyists. Although Gutenberg invented the printing press in 1450, the production of copied manuscripts and printed books continued in parallel for a certain time. The first printed cookery books seem to be the Kuchemaistrey printed in German in 1485 and the Viandier de Taillevent printed in French around 1486. De Honesta Voluptate et Valitudine, a book on dietetics with recipes, written in Latin by Platina, was printed back in 1480. 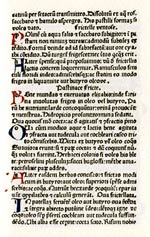 Books printed before 1500 are called incunabula.

To top of page

This manuscript in Danish was for a long time wrongly attributed to the Danish doctor Henrik Harpestraeng, who died in 1244.

One manuscript, dating from around 1300, includes 25 recipes and the second, from 1350, proposes 31 recipes. According to historians, these 2 texts were taken from an unknown French manuscript.

The only copy of Maître Chiquart's cookery book is kept at the Bibliothèque cantonale du Valais in Sion. A transcript of the manuscript, by Terence Scully, was published by the journal Vallesia in 1985.

The B.IN.G. foundation, Bibliothèque Internationale de Gastronomie, conserves a heritage of nearly 4 500 ancient books on gastronomy, from the late 13th to the late 19th century. Headquarters in Sorengo, near Lugano.