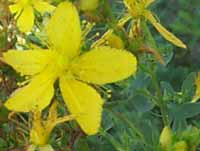 Saint John's wort has large yellow flowers and was traditionally picked on Saint John's day (June 24). It was also called after Saint John in France in the Middle Ages before being called millepertuis, meaning a thousand holes, because its leaves are dotted with many transparent spots (oil pouches) that you can observe under the light.

Saint John's wort was known as a diuretic and a hepatic remedy and as a devil-chaser against evil spells.

It is still used in popular medicine today, as an oily maceration against skin burns, wounds and ulcers. In homeopathic medicine hypericum perforatum (the scientific appellation) is used particularly in case of trauma of nerves.