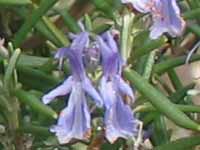 An evergreen shrub reaching heights of 1.50 m, this plant of the mint family was in relation with the cult of the dead in the Roman civilisation.

Ramon Llull, a catalan doctor of the 14th century, is the first to have depicted distillation of rosemary. In the Middle Ages, Rosemary was mostly used as a cordial, a diuretic drink, a tonic for the nerves and a digestive. Rosemary got its share of fame starting in the 17th century with Queen of Hungary water: antirheumatic, made with rosemary flowers, distilled and fermented with honey, allegedly invented by Queen Isabelle (14th century).

The blooming tips are harvested in spring and used to make antispasmodic tea. Rosemary wine is a stimulant for the convalescent and the overworked as well as a remedy against liver illnesses.