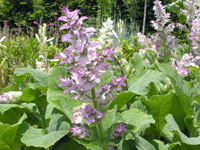 A medicinal plant considered a panacea (universal remedy) during the Middle Ages, Salvia (from the Latin salvare: to save) sclarea, clary sage is also called toute-bonne. Hot and dry, according to hippocratic classification, clary sage is stimulating and antispasmodic. It is also good for healing skin cuts.

Platearius said: a sauce made of clary sage, parsley, vinegar and a touch of pepper whets the appetite that has been lost because of cold spirits in the stomach. Clary sage wine originates from the Middle Ages. Clary sage was also used in cookery: Maître Chiquart proposes a recipe he called cold sage and clary sage is one of the ingredients of the green sauce.