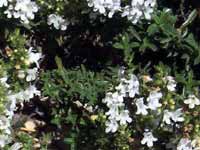 Savory was supposed to sharpen the fieriness of the body. Platina said it exited to lust and was capable of awakening a lethargic man sleeping as dead. This is why some monasteries refused to grow it.