When observing medieval iconography, you can notice that the orchard is often surrounded by a fence of wickerwork or by a wall. But the orchard can also be opened to the neighbouring countryside. The garden of the fruit trees, apart from bearing fruit, can be the cemetery in abbeys, but it is also the favourite place of rendez-vous for lovers in the courtly literature, starting in the 12th century: in Le Roman de la Rose, 13th century, the Rose lives in the orchard of Love and Amant (Lover) is invited to a dance in the orchard of Déduit (Delight). 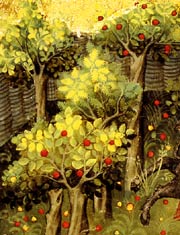 Orchard surrounded by a fence of wickerwork
Taken from the Livre de la chasse by Gaston Phébus, 15th century, BnF

The importance of fruit in European cookery has changed considerably through the ages.

In Sparta, the meal was generally made up of cheese, a barley gruel and figs. The traditional meal in Roman antiquity generally starts with eggs and ends with fruit. Fruits were also used in main courses, combined with garum and vinegar: the Romans were fond of sweet and sour dishes.

They ate watermelon, wild strawberry, melon, blackberry, medlar. They introduced Asian fruits into Europe: peach, apricot, cherry. In the Naturalis Historia (liber XV, fruit) Pline listed the fruits that grew in Italy: 15 varieties of olive, the pine cone (for its small pine nut), quince, pomegranate, peach, grape, 12 kinds of plum, 30 kinds of apple, 41 kinds of pear, 29 varieties of fig, nuts (the generic term included walnut, hazelnut and almond), the chestnut, the cherry, and a few fruits nowadays forgotten: sorb (fruit of the service tree), carob, the fruit of the European Cornel. The Romans were already familiar with tree grafts. 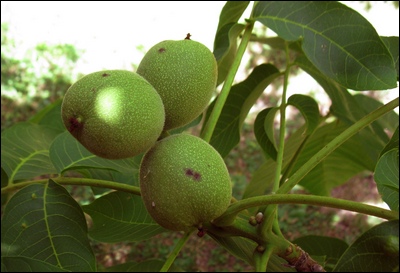 Dates imported from Northern Africa or from Syria were also used in Roman cookery. The Romans, however, knew only citron (citrus medica) of the citrus fruits, which is simply citrus in Latin texts. Citron is a citrus fruit resembling lemon but more bitter still.

Fruits known by the Romans were again found in the Middle Ages and at the Renaissance. To those, coming from the Arabic countries, were added lemon (citrus limonicum) and bitter orange (citrus aurantium).

Bitter orange is a citrus fruit close to the orange, but very bitter and it must be cooked or candied to be good tasting. The sweet orange (citrus sinencis), that we know of today, appeared only in the 15th century, and it was not found in cookery before the 16th century. So beware, when you read the word orange in a medieval text, it always refers to the bitter orange!

Dietetics and sociology of fruit

Fruits are classified both on a sociological scale and depending on dietetic considerations. Since fruits grow in trees, nearer to the heavens, fruits are considered the most noble of earth's produce. Like poultry and birds, fruits are particularly good for the delicate stomach of elites. Wild strawberries and melon, in the mean time, because they are so close down to earth are fruits of lesser interest. Medieval dietetic considerations toward fruits were full of wariness. Doctors tended to want to reject them, but since their patients wouldn't take their fears into account, doctors would recommend eating the fruits cooked rather than raw and gave strict rules altogether for eating these dangerous fruits. Here are some, taken from articles written by Jean-Louis Flandrin: 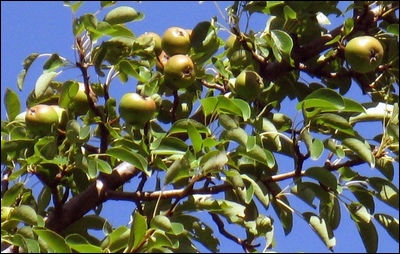 These directions are found again, for example, in the Ménagier de Paris, which has 2 dinner menus for days with meat, with pears, medlars and nuts for 5th dish ; one dinner menu with fruits to finish.

For the wedding of maître Hely, in May, there was: starter: no butter since it was a day with meat. Item, no cherries because none could be found. Therefore: no starter.

At the wedding's supper, scheduled at the end, are apples (bought at the covered market Les Halles) and cheese. The broth is made of capon with blancmange sprinkled with pomegranate and cherry-red bits of sugarcoating and one of the sauces that was served with the roastings was made with oranges.

For the wedding feast of Hantecourt, which was in September, there were grapes and peaches for a starter, as well as pears and nuts with the venison and Fromentée (a wheat porridge)

These directions are still up-to-date in Italy at the Renaissance: Christoforo da Messisbugo wrote down the menu of an imposing banquet in honor of the cardinal and duke of Ferrare, which had oranges and pears for the 9th dish.

Messisbugo and Scappi usually ended banquets with the service of candied fruit, or of fruit cooked in wine, or of sugared fruit: pears, melons, lemons, almonds, quinces, pomegranates, chestnuts.

The differentiation of sweet and salty dishes in cookery, and the rigid ordering of the different types of dishes, during the meals, were unknown concepts, during the Middle Ages and the Renaissance. You could start the meal with fruit and just as well put fruit in courses with meat or fish ; many recipes throughout Europe witnessed to these habits ever since the Romans. Only with what we call classical cuisine did they regress ; in the 14th century, only the French preferred sour flavours in dishes and sauces.

In 13th century Arabo-Andalusian cookery, added sourness in dishes was achieved by the use of sour apples, citron or pomegranates, in addition to that of vinegar and verjuice. In Christian Europe, recipes with lemon juice, of Arabic origin, were called Limonia (or limonea in the Sent Sovi) and they are found in the Liber de Coquina, the Anonimo Toscano, the Anonimo Veneziano and the Modus. Recipes with pomegranate were called Romania (Liber de Coquina, Anonimo Toscano, Modus). The Libre del Coch also uses lemon and orange juice for sauces.

Candied lemon was used in Arabo-Andalusian cookery, and was found again at the end of the 16th century in Lancelot de Casteau. The Viandier de Taillevent (printed edition) has a recipe for blancmange with pomegranates.

25% of the recipes, in the Anonymous Andalusian cookbook, have fruit in them, which is three times more than in Catalan recipes. But apples, quinces, figs, oranges, peaches, pears, raisins and pomegranates are found in the salty recipes of the Sent Sovi and the Libre del Coch (according to Patrick Gillé in les traités de cuisine de la péninsule ibérique – treatises of cookery from the Iberian peninsula). 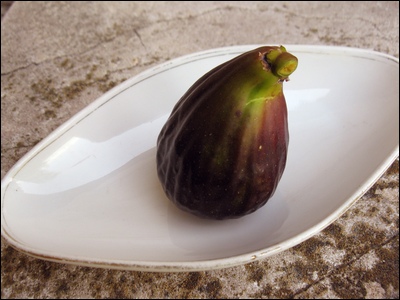 In England and in Italy, the many sweet and sour dishes used mainly plums, dates and raisins, which are found in the Forme of Cury’s Egurdouce, or the Italian Saracen broth (Del brodo saracenico), and chicken Ambrosia (Ambrogino di polli). Maestro Martino and the Anonino Veneziano each have some twenty or so recipes with raisins. The Forme of Cury gives about ten recipes with pine nuts.

Maître Chiquart recommended, at the beginning of the Fait de Cuisine, for the supplies of a banquet: 6 loads of almonds, 12 bags of candied grapes, 12 bags of candied figs, 8 bags of candied plums, a quintal of dates, 40lbs of pine nuts. In his recipe for Parma pies (Tortes parmeysines), you find figs, dates, pine nuts, prunes and raisins, besides an impressive variety of meats. He used the same candied fruit in Fish pies, in Parma fish pies and in a very rich recipe for Rissoles. Maître Chiquart also proposes a Quince pie (Cuyns en pasté), cooked pears and an apples compote (Emplumeus de pomes), all three recipes from the end of the book and made for the sick.

On the other hand, the printed edition of the Viandier de Taillevent, in the 15th century, has only 3 recipes with fruit, a sauce with grapes (Saulce au most) and 2 desserts: a Pâté of raw pears and an Apple turnover (Tartres de pommes) with figs and raisins.

The use of almonds, or almond milk, was developed in all countries and throughout Medieval cookery. The oily nut of these fruits were mostly used as extra liaison for sauces (complementary to bread) or as a substitute for butter or milk on fast days. Almonds were just as well found with meat dishes as with fish preparations. They were also, in the Middle Ages, part of those products which were both food and medicine. As such, doctors could prescribe them. This was also the case for sugar, spices, and hippocras. Thus are almonds and sugar found in the composition of preparations for the sick: 10 recipes for the sick by Maître Chiquart out of 16 contain almonds.

13% of the recipes in Taillevent’s 15th century printed edition and 39% of Maître Chiquart’s recipes (1420) contain almonds.

Fruits lost in the midst of medicines and jams

Banquets were often ended, in the Middle Ages or Renaissance, by the boute-hors (out drive): the meal was finished, the table cleared, and wine and chamber spices were served in another room. The chamber spices were sweets made of spices or fruit, candied in sugar or honey. Ginger can be preserved (gingibrat) as well as coriander or aniseed. Fruit were candied as in the menus of Messisbugo and Scappi: melons, lemons or oranges, quinces, pomegranates, chestnuts … Nuts (pine nuts, almonds, walnuts), they were also candied, else made into more elaborate confectionery, some ancestor sort of nougat: pignolat in France, pinyonada or torron in Catalonia, torrone or copeta in Italy. These candied fruits, as the hippocras people drank at the end of the meal, were supposed to close up the stomach and make digestion easier.

A bit like the candied fruit, jams were also served at the end of the meals, for the same reasons. Jams, however, had much more of a medical aspect to them. The earliest recipes for jams, like those for fruit syrups, are found in medicine books. Compared to ours, the medical beliefs of those times are amusing: doctors were suspicious of raw fruit, they barely accepted fruit cooked in wine and spices, and they recommended, as a medicine, fruit candies, fruit syrups and fruit jams. It was assumed, probably, that the sugar, or the honey used to cook them, allowed for a kind of transmutation of the fruit, which gave them their medical qualities. The difference was slim between medical candy and the confectioner's.

Jam was letuaire in old French of the 12th century. It was (as sugar and spices) bought at the grocer's or the apothecary's. Letuaire was above all a medicine, a medicine of Hippocratus, of Galen, or later, one prescribed by the Arab medicine or by the Salerne School of medicine.

The ambiguity between medicine and confectionery, including jam, is found in the Treatise on cosmetics and conserves by Doctor Nostradamus, in which indications for health care are given at the end of some of the jam recipes. The book was published in Lyon in 1552. Another preserves book was published in 1545 in Paris: Petit traicté contenant la maniere pour faire toutes confitures (small treatise with the way of making all sorts of jams), itself inspired in part by the Antidotarium Nicolai, a 12th century apothecary's book by the Salerne School of medicine, which contains preparations inherited from Arab medicine.

It was easier, prior to the 16th century, to find recipes for jams or candied fruit in apothecary books, rather than in cookbooks. Only in the Ménagier de Paris did we find explanations on how to make a confiture with walnuts, turnips, carrots, pears and [edible] gourds. There are also recipes for raisiné (between a grape compote and a grape jam) and cotignac (a quince jelly) in the Ménagier de Paris. Nostradamus and the Petit traicté mark the start of cookery recipes with fruit in France in the 16th century.

The 13th century Anonymous Andalusian cookbook has, in the last part of the book, several recipes for fruit syrups or raisinés, with pomegranates, lemon, dates, apples, grapes, figs and quinces.

In Italy, at the Renaissance, Stefano Francesco di Romolo Rosselli explained, in Secreti (1593), how to candy quinces, plums and peaches. Giovanni del Turco, gives, in the Terzo Libro (3rd book) of the Epulario e segreti vari (1602), a few recipes for candied fruit as well as peach, orange and citron jams.