The medieval culinary texts in English prove that in the Middle Ages English gastronomy was at the same level of quality as French gastronomy.

This collection, dating from around 1325, includes 63 recipes. It was published in English by Constance B. Hieatt and Sharon Buttler, in Curye on Inglysch (Oxford University Press, 1985). The Anglo-Norman Manuscripts seem to have served as a model for the English book.

There is a manuscript of 1381, kept by the Bodleian Library in Oxford, with 92 recipes, beginning with the Latin words : Diversia servicia, tam de carnibus quam de pissibus. This text was published in English by Constance B. Hieatt and Sharon Buttler, in Curye on Inglysch (Oxford University Press, 1985).

Angleterre - Map of Europe - To top of page

The Forme of Cury

The Rules of Cookery was written around 1390 by the chefs of King Richard II and published in London in 1780 with recipes dating back to 1381 from Ancient Cookery (Diversa Servicia). 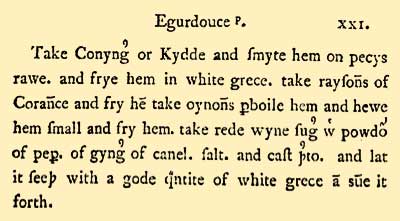 Extract from the 1780 edition

According to Constance B. Hieatt, the Forme of Cury can be classified into four different categories:

The Forme of Cury in the version of the Curye on Inglysch (Edition Constance Hieatt and Sharon Butler in Oxford University Press London/ New York/ Toronto, 1985) includes 205 recipes.

According to Bruno Laurioux, The Forme of Cury never existed in this form because the Canadian historians made a synthesis of the recipes found in various manuscripts. A quarrel among historians perhaps ?

The Forme of Cury, Le Viandier de Taillevent and other medieval cookbooks are known in several incomplete manuscripts of different eras. It is often impossible to present the authentic version of origin because of the many alternatives of the texts that exist. For exemple, what we call by convenience The Forme of Cury, is only the text of the Forme of Cury which had been printed in 1780. Same for Le Viandier de Taillevent, which is the manuscript from the BN du Viandier from the 14th century or from another version or a synthetic version (and imaginary) from these texts.

We will use the recipe names from the Curye on Inglysch version, while indicating between parentheses, the names of the recipes from 1780 when this appears necessary to us.

Contents of the book

The Forme of Cury contains:
An introduction announcing a compilation of recipes that were carried out with the agreement and the advice of the masters in medicine and philosophy who resided under King Richard II. This very young king (only 23 years old in 1390), ruled more or less in a despotic sort of way between 1377 and 1399. He died later from hunger in prison. We know his tragic fate thanks to Shakespeare’s piece on Richard II.

The Forme of Cury wanted to be better and even more royal than Le Viandier of Taillevent. Was there an existing "patriotic" competition between french and english cuisine? In any case, this confirms the role of political representation at the banquets, a symbol of prestige and power for kings and great medieval lords.

As for many cookbooks on medieval cuisine, there does not seem to be very clear plan: the soups and roasted meats or meats in sauces seem to be mixed with recipes for vegetables, (peas, beans, lettuce, leeks...) and recipes for eggs. Some sweetened recipes, (which correspond with our desserts today), are mixed with salted recipes: pynnonade, rosee (rose petals), payn ragoun, (from candy to honey and ginger which can be used to accompany meats and fish), appulmoy, sowpes dorry, fygey, tostee.

Then there are some fish and soup recipes for the lighter days (for example, a recipe for pears in wine: peeres in confyt). One also finds recipes for 10 sauces followed by recipes for fritters, pies, tarts, (the sambocade, tart made from elderberries, is classified with salted tarts). The manuscript wraps up with two blancmange recipes, two sweetened tarts recipes and some recipes for ypocras, claret, and a unique beer made with honey.

As for the majority of medieval recipes collections, you can find dessert recipes, which were dishes of prestige displaying the power of the lords and majesties: cokagrys (or cotagres in Manuscript A, a rooster on a wild boar, covered with gold and silver foils), chastletes (a wild boar pie in the shape of a castle).

As related to southern cuisine,

one can note the presence of about ten vegetable recipes, in which a very rare recipe for a vinaigrette salad, in the cookbooks for medieval cuisine. The medieval English cuisine seems to identify more with the medieval cuisine of the south than with the French cuisine where vegetables are seldom used. The relationship to southern cuisine is equally evident because of the presence of almonds and almond oil in 19% of the recipes, (compared to 12% from the recipes of the Viandier from the 14th century). This percentage rose to 45% in the books during the 15th century (Harleian). The Forme of Cury also uses large quantities of saffron just as the southern cuisine had, (40% compared to 29% in the Viandier).

Its Italian influence is confirmed by several pasta recipes: losyns, rauioles, makerouns, (macrows in Manuscript A), raphioles. The sawse sarzyne, with grenades which does not grow in England, seems to be very similar to the brouet sarrasinois of Anonimo Toscano. One may find many of the recipes to be bitter-sweet, as the Italians like them. One finds also sweetened mustard lombardes as seen in the Italian and Catalan recipes. In addition, 31% of the recipes from The Forme of Cury used sugar, (49% if one adds fruit), compared to 6% from the recipes of the Viandier from the 14th century, (8% if one adds fruit). Some recipes seem to be influenced by the Liber of Coquina, and through him, by the arabic cuisine, like mawmenne for example (mamuniyya Arab): Meat cooked in a sweetened and spiced sauce (stewed). The presence of a confectionary-like payn ragoun, mastered by the arabic technique of cooking in soft ball syrup, confirms the connection between Sicily, (which had been arab, norman and catalan) and England.

Egurdouce [ p.20 ]
Take Conynger or Kydde and smyte hem on pecys rawe. and frye hem in white grece. take raysouns of Coraunce and fry hem take oynouns perboile hem and hewe hem small and fry hem. take rede wyne suger with powdour of peper. of gynger of canel. salt. and cast therto. and lat it seeth with a gode quantite of white grece and serve it forth.

Manuscript 4016 starts with the menus for 2 banquets and then proposes 181 recipes.

Recipe (in French): Pears in syrup flavoured with cinnamon and ginger

xxxv - Perys en Composte
Take Wyne an Canel, and a gret dele of Whyte Sugre, an set it on þe fyre and hete it hote, but let it nowt boyle, an draw it þorwe a straynoure; þan take fayre Datys, an pyke owt þe stonys, an leche hem alle þinne, an caste þer-to; þanne take Wardonys, an pare hem and sethe hem, an leche hem alle þinne, and caste þer-to in-to þe Syryppe: þanne take a lytil Sawnderys, and caste þer-to, an sette it on þe fyre; an 3if þow hast charde quynce, caste þer-to in þe boyling, an loke þat it stonde wyl with Sugre, an wyl lyid wyth Canel, an caste Salt þer-to, an let it boyle; an þan caste yt on a treen vessel, and lat it kele, and serue forth.

This collection of 134 recipes is presented in the form of burlesque verse written between 1422 and 1471. This verse was published from the Sloane manuscript Ms 1986 by Richard Morris in 1862.


A Noble Boke of Cookry

A Noble Boke of Cookry ffor a Prynce Houssolde or eny other Estalety Houssolde: Printed version of a 15th century manuscript, published in London by Robina Napier in 1882.