According to the Chinese world-vision, balance is the result of a constant movement of Yin and Yang. The Qi (pronounced chi) helps living beings in growing and multiplYing, moving and thinking. Qi, which is as invisible as electricity, circulates in the human body along the "meridians". On this network, one can find the acupuncture points.

The universe is composed of 5 elements that control themselves and balance each other and, by succeeding each other, generate each other:


There is a temperament that corresponds to each of these elements:


According to Chinese dietetics, food is classified according to 5 flavours, 5 colours, and 5 consistencies.


As compared to the Westerners, Chinese people consume less meat, fat and sugar and more cereals, pulses, green vegetables and fruits. It is advised to eat about 40 to 60% of cereals and pulses, 20 to 30% vegetables and fruits and 10 to 15% meats, fishes, fats and dairy products.

According to Chinese dietetics

A meal that is prepared according to Chinese dietetics will take into consideration the season, health of guests, composition of each dish as well as the colour of ingredients.

For example, if the cook knows that you have hypertension (too much Yang), he will avoid giving you Yang foods such as cooked pork meats, fried food, food that is too sweet or alcohol. He will provide you food in an atmosphere that is calm and cool and will offer you neutral or Yin food: like Yin fish or seafood, steamed rice or cereals, vegetables.

In order to eat a balanced Yin-Yang dish, all one has to do is simply prepare a recipe based on noodles (or pasta) (white, cool, bitter) accompanied with cabbage (green, cool, sour), shrimps (white, warm, sweet and salty), black mushrooms (black, neutral, pungent), salted meat (red, cold, sweet) and cooked eggs cut in thin slices (yellow, neutral, sweet). Noodles (or pasta) can be replaced by rice and the balance can still be maintained.

As digestion implies cooking of food, it is recommended that one eats food that is cooked and hot, chews well, drinks something hot after finishing the food and avoid overeating.

The origins of Chinese medicine are legendary and are attributed to 3 mythical emperors:

- Shennong (~2737 - 2698 B.C.): considered as the father of phytotherapy and medicines. The writing of first Bencao Jing (Treatise of medicinal plants of Shennong) is ascribed to him.

- Huang Di, Yellow Emperor (~2697 - 2598 B.C.): He is considered as the creator of medicine and acupuncture. The writing of Nei Jing (Classic of esoteric tradition of Yellow Emperor) is ascribed to him.

In reality, the first fragments of Nei Jing date from the time of Hippocrates at a time when physicians separated clearly from magicians and priests.

In addition to its legendary origin, the first texts of Chinese medicine were written during the same period as that of the Greek texts of Hippocratic collection i.e. between 580 and 320 B.C. Then the famous Nei Jing (Classic of Esoteric tradition of Yellow emperor), that was written in the course of several centuries, was written during the period of Han (3 centuries before Christ - 3 centuries after Christ). This text is the theoretical base of the Chinese medical practice. It was later elaborated up to 17th century.

Hua Tuo (110-207) was a great surgeon and an obstetrician. He conducted operations under general anaesthesia induced by ambari hemp (Hibiscus cannabinus). He is credited with the invention of stitching and emphasized on balneotherapy and hydrotherapy.

Many encyclopaedic medical works were written during the reign of Song dynasty (10th - 13th century).

During the reign of Jin/ Yuan dynasty (12th-14th centuries), Zhang Cong Zheng (1150-1228), who is one of the four major teachers of the era states: the concoctions of yore cannot completely treat the diseases of today. In fact, Chinese medical tradition depends on ancient texts but as against Occidental Hippocratic medical tradition, it is less scholastic and more progressive. This may be the reason why Chinese medicine exists even today.

A treatise of dietetics

Around 1314-1330, Hu Sihui, a physician of Mongolian origin wrote a treatise of dietetics: Yinshanzhengyao (Handbook of diet) that contains recipes with ingredients that have therapeutic virtues. These recipes are still part of diet of Chinese population living in Northern and Northwestern regions of China (94 dishes, 35 soups, 29 anti-ageing recipes).

Li Shizhen (1518-1593) wrote Bencao gang mu (Great treatise of medical matter). It is a big encyclopaedia of pathology, therapeutics, as well as a treatise of natural history (minerals, animals, vegetables) that served as a reference. 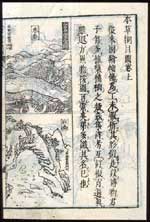 Zhenjiu dacheng, an Encyclopaedia of acupuncture written by Yang Jizhou appeared in 1579.

In the 18th and 19th century, several encyclopaedias modified and corrected medical texts (Chinese medicine is a progressive system of medicine).

Teaching institutes were created from 1955 onwards. In 1979, WHO recognized Chinese traditional medicine.

In the present day China, traditional medicine and western medicine coexist peacefully. In Universities, both are taught for same length of time but a different degree is bestowed after the successful completion of studies.

Chinese dietetics resembles Hippocratic and Ayurvedic dietetics: it is a preventive dietetic that takes into account the seasons, food is classified according to categories and it is recommended that it be eaten according to its temperament in order to achieve a balance that is conducive for good health. For these 3 dietetics, digestion implies cooking of food in the stomach.

However, Chinese medicine and dietetics present a uniqueness that is quite strange to our Indo-European culture: the notion of movement. For Chinese people, balance is not static but is the result of a constant movement of 2 opposite, complementary and interdependent forces: Yin and Yang.

The occident has become familiar with the symbol of Tao. However, it is not certain that the ideas of Yin and Yang have been well understood by our culture.

Qi (pronounced chi) is another important element of Chinese world vision. This word can be translated in the Indian manner by "organic air", in Hippocratic system it can be translated as "pneuma" or in the modern manner by "energy" or "force". It is the concept that explains life. It is Qi that helps living beings to grow and multiply, move and think, Qui that explains the movement of stars and air. The Qi, as invisible as electricity, moves around in human body with the help of an immaterial network that the Chinese call "meridians". "Acupuncture points" can be found on this network. One is in good health when Qi moves well and in sufficient quantity and when it does not circulate correctly, one is sick. Acupuncture, responsible for improving the movement of Qi, is one of the elements of Chinese medicine.

Dietetic is also an important element of Chinese medicine and depends on the Chinese world vision.

The 5 elements correspond to temperaments that evolve according to the period of life. It is a continuous movement (as opposed to the western world vision that is linear with a beginning and an end).


Like Ayurvedic and Hippocratic medicine, there is a temperament that corresponds to each element


From these 5 elements, we observe a set of corresponding elements and reciprocity.


The Chinese eat less meat, fat and sugar as compared to Western people and more cereals, pulses, green vegetables and fruits. The advised division is as follows: 40 to 60% cereals and pulses, 20 to 30 % vegetables and fruits and 10 to 15 % meats, fishes, fats and dairy products.

4 - Cuisine as described in Chinese dietetics

From this complex classification, Chinese medicine can find out dysfunction and foods that are useful to re-establish the balance. There are Chinese cooks who still believe in their time-honoured culture and know about the concept of warm and cold food. It is a concept that was also prevalent in Europe during Middle Ages.

Everyone knows that winter is Yin and summer Yang and that it is preferable to eat a Yang product (heating) in winter and a Yin product (cooling) in summer. A foodstuff that has a pungent taste such as garlic or ginger or a food that has a sweet taste such as carrot or pear is a Yang food. Whereas a food that is salty such as shrimp, crab or sauerkraut and a product that has a bitter taste such as tea, coffee or celery is a Yin food.

As digestion is a sort of cooking of food, it is recommended to eat cooked and hot food, to chew well, drink something warm after meal and avoid overeating as all this facilitates digestion.

In order to preserve their energies, foods must be eaten very fresh: it is a seasonal cuisine. Often, one chooses live fishes and crustaceans in restaurants in China, and Japan, in order to eat them when they are quite fresh. In addition, the colour of foods is an element of harmony of a meal: foods are classified into green (salads, green vegetables), red (tomato, carrot, and red fruits), yellow (cereals, noodles, and potatoes), white (rice, turnip, and radish) or black (olive, aubergine, black mushrooms). In order to prepare a meal, a good cook will take into consideration season, what sort of weather it is on a particular day, state of health of his guests, harmony between different ingredients that can be found in a dish...

Taking into account foods that are Yin or Yang, warm or cold, dry or humid, sour, bitter or sweet etc. the Chinese cooks have perfected a very sophisticated and varied cuisine. As China is a very big country with climates that vary a lot, each regional cuisine has its recipes and specific ingredients, but all of them abide by the same rules of dietetics.