The heritage of America

Tomato, potato, squash, bean, corn, peanut, hot pepper, cacao, vanilla, pineapple... turkey
All these products were unknown in Europe, Asia and Africa before the discovery of the American continent by Christopher Columbus in 1492.

The memory of human beings for food is rather short. We often only run back to the flavours and the products of our own childhood. With an effort we can gather things from a very far past, like from the childhood memories of our grandparents. This is why cooking from the beginning of the 20th or the 19th centuries looks to many of us like having always been that way, the way our ancestors have always eaten, since the dawn of time. 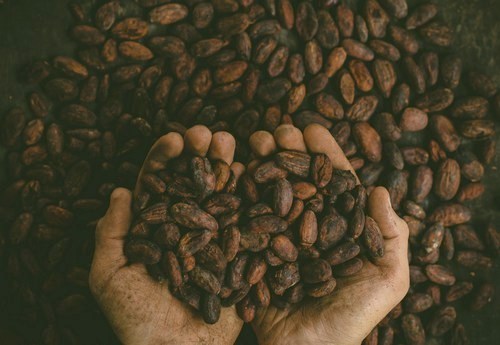 Cacao in Colombia: Photo by Pablo Merchán Montes on Unsplash

Most of us are then surprised to learn that our prized local specialties are often recent on the historical time scale. Can you imagine Mediterranean cooking without tomatoes or zucchinis? Irish stew without potatoes? Indian cooking without hot peppers? African meals without cassava?

Here is a list of products that have not been eaten in Europe, sometimes actually before the 19th century, because they are all native to Latin America.

Products native to Latin America
unknown in Europe, Asia and Africa during the Middle Ages

Phaseolus vulgaris is a leguminous plant native to the South of Mexico, Yucatan and the warmer parts of Ecuador, Bolivia and Peru. Called Ayacotl in Central America, the common green bean landed in Europe in the 16th century; canon Piero Valeriano started growing it in Italy in 1528, starting with a few seeds offered to Pope Clement VII. In the 18th century, numerous varieties of beans were already found at the markets in the Languedoc region of France. The bean adapted so well to the European climates that is was soon thought to be indigenous. 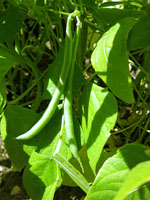 Black-eyed peas was the only bean type leguminous plant native to the Old World. It was already grown in Italy by the Romans and called Phasiolum. This pea, which is somewhat smaller than the seeds of the American variety of beans, is now practically totally forgotten in Europe. It is still cultivated in parts of Italy, Spain... and the United States.

The traditional French cassoulet doesn't go back to the Hundred Year's War, as the legend would have it. It is in the 18th century that the mulard mule duck, used for duck confit, appeared and that the white bean of the cassoulet developed.

Cacahuaquchtl, the tree of the Maya gods. The cacao tree (Theobroma cacao L.) is 5 to 6 meter high and native to the tropical rain forests of Yucatan and Guatemala.

Each cacao pod contains 20 to 40 seeds that are to ferment, dry, be roasted and ground in order to give cacao paste, then chocolate. 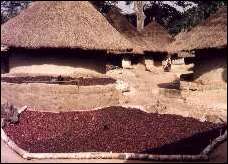 The Mayas and the Aztecs roasted the seeds, ground them and mixed the powder with boiling water, spiced with hot pepper, or with musk and honey, or with corn flower.

They would then drink the tchacahoua (Mayan) or the tchocoatl (Aztec) of aphrodisiac repute. The Spanish later replaced the hot pepper by vanilla, sugar and cream. The drink brought back to Spain by Cortez in 1527 became "chocolate". It was the object of conversations throughout Europe by 1585.

While spices, which have been used ever since Antiquity are still often considered somewhat exotic, chocolate, which is eaten since the 17th century, has become a local specialty in many parts of Europe, illustrating how the miracle of chocolate arose from the immaterial art of the chocolate maker.

Christopher Columbus discovered corn in Cuba in 1492. Corn has been present since the dawn of time from Mexico to the Andes. Maize isn't always yellow and can actually be blue, red, white, black and even multicolored. Corn was the staple food of the South and Central American Indians, eaten in the form of gruel or tortillas, like wheat, made into bread, was the staple food of the Europeans. 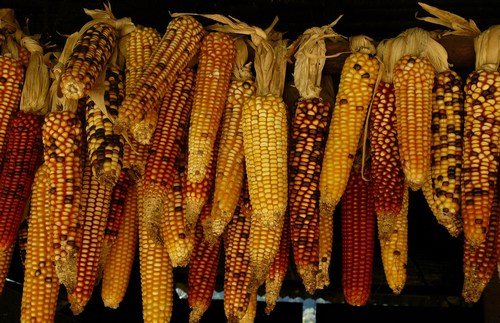 Maize in Guatemala: Photo by Roderico Y. Díaz on Unsplash

Maize started to be grown in Lebanon, Persia and Egypt, in 1520. The Portuguese then introduced it to Africa. It later reached Europe, through the Balkans.

Polenta, which in Italy and Savoy was traditionally, since the Romans, made of wheat semolina became cornmeal polenta. 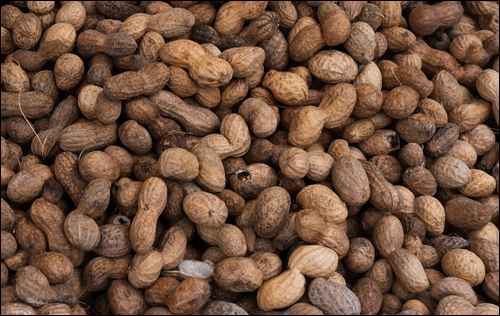 Peanuts in USA: Photo by Akshay Nanavati on Unsplash

The peanut is a legumuminous plant (Arachis hypogea) native to Mexico. It was called tlacacahualt by the Aztecs, which gave cacahouète in French and cacahuete in Spanish.

Hot or Chile pepper, capsicum or sweet or bell pepper

Hot pepper is said to have been discovered by Christopher Columbus in Cuba in 1493. Bell pepper is a variety of mild hot pepper that appeared in Southern Europe in the 18th century and was called sweet pepper. 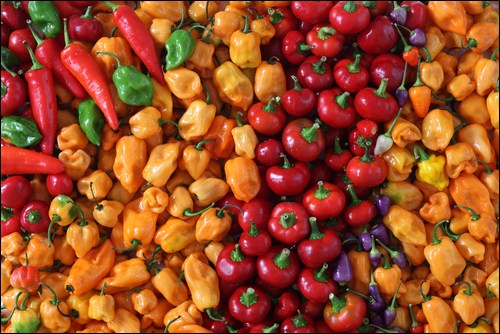 Some pepers in USA: Photo by Randy Fath on Unsplash

Peppers are all of the genus Capsicum, Solanaceae family, and there are many different species varying in size, colour and piquancy, such as paprika, pimento, chiltepin (alias pili-pili?)...

It is attested that paprika was present in Hungary in 1604. The Turks would be the ones to have introduced it, through Bulgaria, as a substitute for black pepper. Paprika was used as a medicine to fight cholera during the 1831 epidemic and then became an emblematic specialty in Hungary. You find it everywhere, embroidered, sculpted, on earthenware, in frescos or paintings. Paprika would be derived from the Serbo-Croatian word papar meaning pepper.

The chilli peppers have been such a success everywhere that it is difficult today to imagine Indian or African cooking without them. Spiced food is often heard as hot food nowadays. But the Medieval cooking consisted of food favoured with spices without being hot. Consider, the hot chilli peppers were unheard of in the Middle Ages, outside of the Americas.

Potatoes (Solanum tuberosum) were first cultivated by South American Indians in Bolivia, Peru and Chile. Spanish man Pedro Cieza depicts the papas in 1533 probably, though a manuscript of the Bibliothèque nationale de France states 1553.The first written trace of the patatas were found in a delivery slip dated 11/25/1567 for potatoes grown in the Canary Islands and destined to Antwerp. In 1574, another boat coming from Las Palmas delivers potatoes to Rouen. It appears that the first plantations on the European continent go back to 1570.

In 1588, a botanist, Pierre de l'Ecluse, grew a patch of potatoes in order to examine them and called them taratuffi (little truffle), which gave kartofel in German and cartoufle in French. Tartifle, truffe, truffole and trifolà are variants in various patois.

And truffade is the name of a potato and cheese specialty in Auvergne. Since 1716 the French call it pomme de terre (earth apple).

Spanish and English soldiers likened the potato to the sweet potato (papas) and called it little papas: patata in Spanish, potatoe in English.

The potato is introduced to Germany from Spain during the Thirty Years' War. Parmentier discovers it there and promotes it in Paris in 1783. (Who hasn't heard the anecdote about the guarded patch made to encourage theft?). 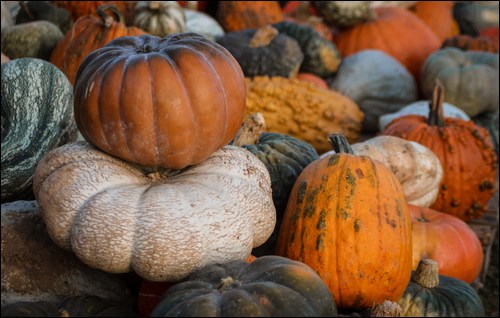 Pumpkins in USA : Photo by Lesly Juarez on Unsplash

Courgettes, or zucchinis, are a recent variety of cucurbita pepo. The word courgette, for a small courge picked before full growth, was included in the French Larousse dictionary in 1929.

The only type of marrow known in medieval Europe is a gourd (cucurbita lagenaria vulgaris) native to South Asia. There is a recipe for Gourdes in potage, in the Forme of Cury.

The tomato (Solanum lycopersicum) is native to Mexico. The wild ancestor of cultivated tomatoes could be a kind of cherry tomato. Tomat was eaten by the Indians in the form of a sauce spiced with peppers.

Naturalist Petrus Andreas Matthiolus depicted tomato in 1544 as a dangerous product similar to mandrake. Tomato was long considered a slightly noxious medicinal plant. In France, it was called Pomme d'or (golden apple) or Pomme d'amour (apple of love) then; it is pomodoro in Italy today.

Actually, it has taken some time for tomato to become an accepted vegetable in all of Europe. In 1760, the Vilmorin Andrieux catalogue classified tomato as an ornamental plant. Only in 1778 did it become a garden plant. In 1785 it is the gardening encyclopedia Le bon Jardinier that makes tomato a vegetable. As with potatoes, it was only during the French Revolution that tomatoes really started being eaten. Two restaurants runned by Provencal chefs, Les Trois frères provençaux and Le Boeuf à la mode, put it on the menu.

In the 1838 issue of Viard's Cuisinier royal, the many recipes of cooking from Provence do not use tomatoes; only 3 tomato sauce recipes, a soup with tomato purée and stuffed tomatoes. Tomato wasn't mixed with other products yet.

The first recipe for Italian pasta with tomato sauce was written in 1891 by Artusi in La scienza in cucina: a recipe for Neapolitan macaroni.

The marriage of King Charles IX in 1570 was the first official occasion in France with dinde served at the banquet. Turkey notably saved the Mayflower pilgrims from famine in November 1620, thus the Thanksgiving commemoration meal.

Vanilla planifolia is a tropical orchid, a parasitic liana of the jungle trees of Central America and the north of South America. Vanilla is the fruit of this orchid. The pods are boiled then dried; giving the black fragrant sticks we buy today.

Cultivation of vanilla fragrans, the most fragrant species, was difficult to adapt away from its native area where no apidae meliponinae, the indigenous stingless bee, would pollinate it. Artificial fertilization was imagined around 1830. What would pastry makers do without vanilla today?

An other vegetable - Top of page