The Legend of Marco Polo and the discovery of pasta

The noodle dates back to the dawn of recorded human history, around the third millennium BC. Invented by the Chinese and passed down from generation to generation, it came to Europe when Marco Polo returned to Venice from China and taught his people the skill of noodle-making. (Célébration de la Nouille, Raymond Oliver, Robert Morel 1965)

This popular legend is in fact a fictional story invented at the beginning of the 20th century by Macaroni Journal, an American journal published by the pasta industry. And it still works!

To learn the real history of pasta

We investigated using the work of historians Silvano Serventi and Françoise Sabban (Les pâtes, Actes Sud, 2001). Here are our results:

Studying old texts, we found that the words revealed two paths of understanding of the history of pasta and its diversification during Renaissance Italy:

To resolve this complicated affair, we divide the story of pasta into 2 geographic regions:

Pasta in the Middle East/Europe

We find fresh pasta made from soft wheat and dried pasta made from hard wheat served with short sauces. Their fabrication dates from Roman Times for fresh pasta of the lasagna variety. We found the first trace of vermicelli pasta in 3rd century Palestine, and throughout the Arab world from the 9th century onward. Pasta arrived in Northern France and Germany in the 12th century via the Jews. At the same time, the Arab-Andalusian influence brought pasta to Spain and Sicily. From Sicily, it developed and expanded in Italy before becoming a truly global dish from the 19th century onward.

We find pasta made from different ingredients and prepared by steaming or poaching in broth with vegetables, meat, fish or seafood. The first recipes appeared in Northern China in the 3rd century and are found throughout China between the 10th-13th centuries.

Here is a historic method, rather unique in modern times, to cook pasta: sweet pasta with spices.

1 - Fresh pasta from the lasagna family

Fried lasagna from the Greeks and Romans

All fresh pasta of the lasagna variety is made with soft wheat.

2 - Dried pasta from the vermicelli family

From the Jewish Community

From the Arab World 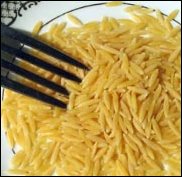 Preparation of fidaws
Vigorously knead about one Rtel of semolina [480g] with water and salt, fold the dough, put it in a covered container, roll the dough little by little between the fingers forming grains the size of a wheat grain, each grain of pasta should be fine and the edges should be finer than the centre, put the rolled pasta into a basket. When all the dough is used, dry the pasta in the sun and knead more dough in the same manner until we have the quantity of pasta needed.

To cook the pasta, take good mutton meat, from the loin or saddle or other. Cut the meat into medium-sized pieces, rinse and place in a large pot with a lot of water, salt, oil, pepper, coriander and a bit of diced onion and cook; once cooked, remove and place in a covered terrine, filter the broth, wash the pot, and return the broth to the pot, see if it is enough to cook the pasta, otherwise add more water.

When the broth boils, add the pasta slowly, cook over medium heat until pasta are sufficiently cooked. Meanwhile, boil water in a small pot. If the large pot of pasta becomes dry, add water from the small pot to prevent burning.

Once the pasta is cooked, add fresh butter or smem (salted preserved butter), bring back to a boil, and stir delicately with the handle of the ladle to avoid breaking the pasta. Meanwhile, brown the meat in a tagine with butter and smem, when the pasta is ready, pour into the terrine, place meat on top, and sprinkle with cinnamon and ginger and eat bismillah.

Outside of itriyya and fidaws, American historian Charles Perry found a variety of Persian pasta called lâkhshâ, which means slippery things. They consist of fresh pasta similar to the vermicelli family, rather than the lasagna family.

Lâkhshâ would be the predecessor of the family of noodles which developed in Central Europe. The connection is found in the names: laska in Hungarian, lapsha in Russian, lokshina in Ukranian, loskshn in Yiddish, lakstiniai in Lituanian. We ignore the origin of the German word nudle, which became nouille in French and noodle in English.

In 15th century Italy, the types of pastas made went through a large diversification, which resulted in the creation of many different names: croseti, formentine, maccaroni, quinquinelli, ravioli, tortelli, vermicelli. The names and recipes for each differed from one region to another.

The generic word pasta was not used in the modern sense until later on. In the 14th century, Sardinian merchants used the expression obra de pasta to refer to the dry pastas that they exported abroad. In 1570, Bartolomeo Scappi edited his grand treatise of cuisine Opera, the Book Five, Libro delle paste (book of pastas) and included recipes for pâtés, tortes, pies and cakes like sweet cakes, waffles and marzipans.

The makers of fresh pasta were small artisans who produce for local customers. The makers of dry pasta were more important artisans, as their products were exported. Pasta manufacturers who made semi-industrial quantities appeared in Italy from the 17th century. The industrial era began at the end of the 19th century with the arrival of hydraulic presses, when all pastas were made from hard wheat.

In Germany and Alsace, there is a long history of pasta. In 1507, the first cookbook on Alsatian cuisine is published (Kochbuch) and in 1540, the German version by Platine (Von allen speisen und Gerichten, Strasbourg) already listed recipes for pasta. From the 17th century, the pastas of Alsace (noodles) are already rich in eggs. Fresh pasta, called nudeln, would later be called nouilles in French and noodle in English. 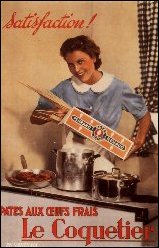 In France, for centuries, pasta were called nouilles, macaroni and lasagnas... in Provence, they were called menudez, macarons, vermisseaux or fidiaux.

It would take until the beginning of the 19th century to use the generic word pasta to describe all these different types.

The spread of pasta around the world was due in part to the immigration of Italians, who brought their knowledge and tastes, to the USA and Latin America.

Another way to learn more about the history of pasta (in French): Liliane Plouvier, historian from Brussels and specialist in the history of cuisine and confectionary in Europe.

Noodles and China - The art of cooking pasta - Top of page