The legacy of the monks

Among the regional products from Medieval Times, many originated from the monasteries that invaded Europe between the 9th to 15th centuries. There were almost one thousand monasteries in medieval France, of which 251 were Cistercian abbeys and 412 were Benedictine abbeys, along with over 700 monasteries in England.

These houses consisted of between twenty and up to 400 monks at Cluny in its heyday. But the intellectual and economic influence of the monasteries was not proportional to their numbers. The monasteries were indeed a center of stability and remarkable technical innovation at this time. Monks and nuns were seen as intellectual elite who could read and write (uncommon in medieval Europe). It was a free and highly-skilled labor force available to the monastery, with the help of many brothers, nuns, peasants and paid craftsmen. Even though time reserved for prayer was important for religious reasons, the production of the monastery was often more efficient and therefore more economically viable than the work of artisans and peasants of the secular world.

This is why monasteries were often rich in their heyday (12th century). It is true that they carried many burdens: maintenance of the monks and lay brothers, patient care or education, aiding the poor, welcoming pilgrims. A monastery was required to feed all the people in the institution. As donations were not enough, the monastery cultivated plants, raised livestock, and tried to generate surpluses that were sold to others.

Over time, the monasteries developed products which became well-known. These foodstuffs became the "regional products" we know today. Some of these products are still made by monasteries but the majority of them are now manufactured by companies unrelated to the monks.

It would be tedious to compile a comprehensive list of foodstuffs of monastic origin. We simply state here the most famous and significant with their original congregations. We list the cheeses, wines, beer, fruit brandy, of monastic origin, patrimony bequeathed by the monks and nuns of the Middle Ages, shared with and developed by people today.

The transformation of milk from cows, goats or sheep into cheese is a very old process. Our ancestors, the Gauls and Germans, manufactured and consumed primarily of butter and fermented milk. Therefore there are few cheeses in the countries of Celtic origin (Brittany, Ireland). But the Romans, who preferred olive oil to butter, made many cheeses from milk curd. This probably explains why the medieval monasteries, heirs of the Latin culture and possessing large herds, developed the production and sale of quality cheeses while the cheese of peasants was mainly consumed on the farm.

The fabrication of formaige or fourmaige (which became Fourme in Auvergne) was almost nonexistent in the Middle Ages in Brittany, in the Southern Alps and Aquitaine. To study the geographical distribution of cheese, we found that hard cheeses or veined-cheeses like Roquefort were easy to carry and were thus produced in agricultural zones far from cities. Cheeses that were harder to transport and preserve, such as brie, were made closer to cities.

Parmesan cheese was the most frequently cited cheese in medieval European gastronomic cuisine. The reputation of a cheese, like a wine, often depended on the reputation of those who consumed it. Brie became famous because it pleased Philip II Augustus, Charles, Duke of Orléans, or Henry IV of France. It became the King of Cheese when Talleyrand emphasized at the Congress of Vienna. But Brie does not originate from the monastery as do the following cheeses: 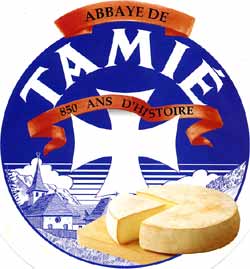 , monks and nuns currently producing quality products benefit from the image of a long tradition of manufacturing.

Cheeses such as Chaussée aux moines focus all their marketing on the tradition of cheese produced and consumed by the monks, despite the fact that they have no direct relationship with a monastery.

The Catholic religion, dominant in Europe during the Middle Ages, needed wine for its liturgy. The religious rite of Mass is the symbolic representation of the sacrifice of Jesus Christ. In the sacrament of the Eucharist, the priest and the faithful are called to communion with Jesus by eating the bread, the Body of Christ and drinking the wine, the Blood of Christ. Moreover, wine is very common in Christian symbolism: in addition to the many references to wine found in the Bible, Jesus changed water into wine during the wedding at Cana and he prays over a glass of wine at the Last Supper. In a parable in the Gospel of John (15), Jesus said: I am the true vine, and my Father is wine grower. I am the vine. You are the branches.

That’s why, from the earliest centuries of Christianity, the abbots of monasteries and bishops throughout Europe became wine growers and cultivated vineyards. They went on to develop the Gallo-Roman vineyards spared by the barbarian invasions or to create from scratch the vineyards in the wilderness or higher latitudes (England).

A number of Catholic saints were associated, either through legends or historical facts, with vineyards at the end of the Roman Empire and early Middle Ages: St. Martin and the vineyards of the Loire Valley (his donkey, grazing on vine leaves, may be the originator of short pruning the vines), Saint Germain and vineyards along the Seine in Paris, Saint Remi of the vineyard of Reims, Saint Didier and the vineyards of Quercy.

The monasteries which developed between the 9th and the 13th century consumed a large quantity of wine. It was used for the liturgy but also appeared on the menu of the monastery. While particularly ascetic monasteries prohibited its consumption, wine was generally accepted as a part of the daily diet in the Middle Ages. Wine was also used for the care of the sick and elderly. Interest in wine was also economic, as wine surpluses were sold and the profits kept in the monastery’s treasury.

Desmond Seward counted 109 wine appellations of monastic origin in France alone. There would also be 45 in Germany, 27 in Austria, 17 in Italy, 12 in Switzerland, 9 in Portugal, 7 in Spain, 5 in Greece and 4 in Great Britain.

Burgundy, a region of great abbeys and great wine:

Germany: the Benedictines of the Abbey of Fulda are originally Clos Johannisberg.

Portugal: the banks of the River Douro (Porto wine) have long been planted with vines and operated by monks.

The first description of beer-making came from a prior of the abbey of St. Gallen in Switzerland on the shores of Lake Constance. It described beer brewed under three categories: the Prima Melior for fathers and distinguished guests, the Seconda for lay brothers, and Tertia, manufactured in large quantities for the pilgrims. The ale was made originally without hops. Ale with hops (cervesia lupulina) appeared for the first time in a charter of the abbey of Saint Denis in 768. It was the Benedictines in Lorraine who introduced hops to beer-making. They distinguished between beer for the fathers (potio fortis), strong beer for the monks and beer of the convent, weaker in alcohol for the nuns (in La vie quotidienne des religieux au Moyen Age, Léon Moulin, Hachette, 1978).

Monastic breweries were common throughout the medieval northern France: beer was mostly produced in countries where the vine was not able to grow well, to replace wine. But from the 15th century, many monasteries, in competition with craft brewers, abandoned their breweries. In the 16th century, only the brewery of the Abbey of St. Lawrence of Dieulouard in Moselle is still known. It disappeared during the French Revolution.

This is not the case in Germany and Belgium where abbey beers resisted industrial competition. The name of the city of Munich, the German capital of the beer, comes from the word monk! And Saint Arnold, a Flemish abbot of the Benedictine abbey of Oudenburg, is the patron saint of brewers. Legend says that he found that beer drinkers were less sick than others during epidemics.

There are 5 breweies in Belgium that make Trappist beer:

Several commercial breweries that purchased monastic breweries or reproduced beers formerly made by monks have the right to the appellation Abbey beer.

In Germany, several convents of nuns in Bavaria, still have breweries, specifically: the convent of Mallersdorf (near Munich) and the convent of Ursberg (between Augsburg and Ulm).

The principle of distillation was known during Antiquity, but the production of alcohol did not begin until the Middle Ages.

During the Middle Ages, making elixirs of life or fruit brandies was the responsibility of apothecaries and doctors. Because fruit brandies (aqua vitae), as its Latin name suggests, was a drug widely used in Arabo-Persian medicine, and then spread across the Mediterranean. The first to leave a paper trail of the technique of distilling alcohol and fruit brandies in Christian Europe were the Catalan theologian and physician Arnaldus de Villa Nova and a Franciscan monk who later became a cardinal, Vital Dufour. The latter wrote, circa 1310, a book of medicine that was found in the Vatican library and described the virtues of "burning water" (aygardent) which would later be called Armagnac.

An Italian religious congregation, the Jesuates, also specialized in distilling alcohol, but we are unsure of whether this was for drinking or medicine. They were nicknamed padri dell'acquavita: fathers of eaux de vie. A legend credits the creation of whisky (uisge beatha or water of life in Gaellic) to St Patrick and the monks who evangelized Ireland, but the first historical mention dates to 1494 and comes from Scotland. However, it seems that Irish monks were responsible for the early manufacture of whisky and they exported their expertise to continental Europe which led to the creation of clear fruit brandies.

It is interesting to note that the production of clear fruit brandies (mirabelle, kirsch, quetsche, Elixir de Spa, Becher Liqueur) were located in quadrilateral between Vittel, Spa, Ems, Carlsbad, which corresponds to the zone of influence of the abbeys of Benedictine or Irish order of Luxeuil, St Gallen, Salzburg, Fulda: links seem to exist between the origin of these spirits and the monastic world.

The manufacture of Kirsch is also attributed to Benedictines of Fontgombault and Trappistine is made by the Cistercian monks of Orval. Do these productions date from the Middle Ages? In fact, the majority of monastic fruit brandies famous today were developed in the 16th century: Benedictine (Dom Bernardo Vinalli, Fecamp) began in 1510. Chartreuse seems to date from 1605, but the recipe by Carthusian monks of Vauvert was not transmitted to the monastery of the Grande Chartreuse until 1735 or 1737.